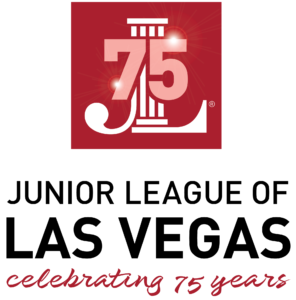 Over 75 years, Junior League of Las Vegas has contributed over 1.1 million hours of community service and raised more $1.5 million dollars for the community through service projects and monetary support. Junior League of Las Vegas has also awarded more than $750,000 in educational grants to teachers in Southern Nevada in support of innovative classroom curriculum to enhance student learning.

Junior League is one of the oldest and largest women’s volunteer organizations in the world, with roots dating back to 1901. The Las Vegas chapter was established on February 26, 1946 with 24 women and has grown substantially to include over 500 active and sustaining members. Junior League of Las Vegas has played a founding role in numerous non-profit organizations including HELP of Southern Nevada, Shannon West Youth Homeless Center, The Shade Tree of Las Vegas, Ronald McDonald House Charities of Greater Las Vegas, Discovery Children’s Museum, and Super Summer Theatre.

“For seven and a half decades, our organization has worked to make an impact for women and children, in the areas of education and overall health and wellness within our community,” said Phoebe Cooper, President of Junior League of Las Vegas. “The tireless work of our members and generous support of our donors and partners have made a tremendous impact in how we’ve been able to show up and give back to the Las Vegas community. As we’ve seen during Covid, the need for support services has never been greater and the Junior League of Las Vegas remains committed to answering the call.”

As one of Southern Nevada’s longest running nonprofits, Junior League of Las Vegas invites the community to celebrate the anniversary milestone in 2021 with events throughout the year, which include:

On Friday, February 26 from 4:30 p.m. to 6:30 p.m. the High Roller and the Eiffel Tower will turn their lights red for Junior League of Las Vegas. Other community partners will display messages of support on their marquees, including Paris Hotel and Casino, The Venetian Resort Las Vegas, The Palazzo, Treasure Island, the Sahara, Thomas & Mack Center and Springs Preserve.

● Little Black Dress Initiative – March 8 through March 12, the Little Black Dress Initiative will be coming to Las Vegas for the first time ever. This week-long awareness and fundraising campaign will bring awareness to the challenges that poverty places on children and teens. Participants will wear the same black dress (or outfit) for 5 consecutive days, with the goal of raising a total of $7,500 to celebrate Junior League of Las Vegas’ 75 years. To donate, visit https://e.givesmart.com/events/krH/

● Paint the Town Red Gala – Junior League of Las Vegas will hold this signature fundraiser virtually on April 10, 2021, with honorees Sally Rycroft as the recipient of the Lifetime Community Achievement Award, and Pat Mulroy as the recipient of the Florence Lee Jones Humanitarian Award. The event will be streamed at 7:00 p.m. and will feature a silent auction and
entertainment. For tickets, visit https://e.givesmart.com/events/jdk/